Aaron Winborn (a person with ALS) and his Eye Writer Experience 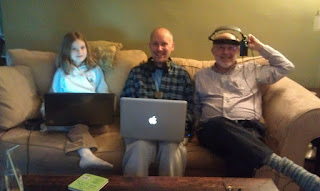 This is Aaron Winborn, a person with ALS.  He learned about the eye writer project last summer and convinced his father to build one for him.  Aaron has it now, and is planning to demonstrate it at the Hershey PA ALS support group next month.

Aaron writes to me about his experience in building the Eye Writer:

I am attaching a photograph of the device, worn by my father on the right. As you can see from it, our design is slightly different than the original that was built for the artist. In particular, during testing, we realized that the weight of the camera caused the whole thing to slide down your nose when it was attached to an eyeglass frame. Thus, we attached it to a visor instead.

This is an early iteration; my father is working on a new version with some planned improvements to the design based on his experience building it.

In general, after using it, I believe that it will be easier to use when/if I am in a locked in state, because it easily loses its calibration if I move my head just a little. That is why that if you take into the site where the project was 1st developed, you will see that during the original development, they strapped their volunteers' heads down: http://eyewriter.org/
Pictured:  Aaron (in middle) Aaron's Father (on right) Victor Winborn, and his daughter Ashlin Phifer-Winborn (on left)
Posted by Alisa Brownlee, ATP at 5:12 PM