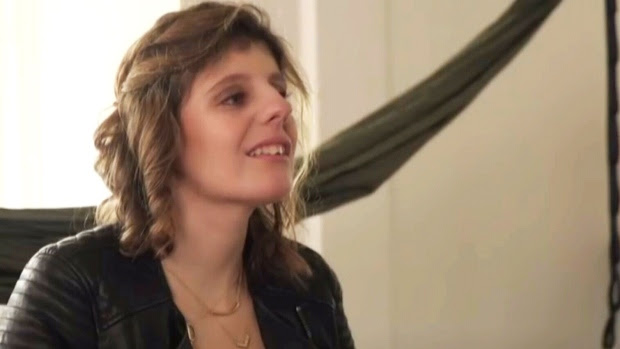 Carly Fleishmann can't speak, but she's opening up a world of possibilities by communicating through typing. Avis Favaro reports.

Karolyn Coorsh, CTVNews.ca Staff
Published Friday, May 6, 2016 10:15PM EDT
A smart and sassy 21-year-old who has autism has created a talk show in the hopes of inspiring others to find their voice.
Carly Fleischmann, of Ontario, can’t speak, but that hasn’t stopped her from launching what is believed to be the world’s first-ever non-verbal talk show.
The online show, called “Speechless” is going viral after she snagged one of Hollywood’s hottest stars for her debut interview – actor Channing Tatum.

Carly Fleischmann talks to Channing Tatum in the first episode of her new show, "Speechless with Carly Fleischmann." (YouTube
As host of the show, Fleischmann types her questions, which are then voiced by her computer and posed to the interviewee.
Many people assumed that Fleischmann’s future was limited after she was diagnosed with autism and oral motor apraxia at age two. But after learning to type, Fleischmann revealed her razor-sharp mind. Since then, she has co-published a book, appeared on multiple TV shows, and is now aiming to become the world’s first non-verbal talk show host with autism. Her objective, she says, is to “prove that it doesn’t matter what comes out of your mouth, it’s the voice within that needs to shine.”
And she doesn’t shy away from the asking provocative questions.
In her interview with Tatum, Fleischmann asks, “Would you date a 21-year-old person with autism?” Tatum quips: “Yes … but I have to get my wife’s permission first.”
Fleischmann’s shoots back: “Alright, I’ve got my lawyers working on your divorce papers as we speak.”
And she didn’t stop there, asking Tatum about his previous career as a male stripper. “How many girls at the end of your night would take you home” she asks as Tatum laughs.
Her mother, Tammy Starr, said she was “laughing my head off” when saw the interview.
“I couldn’t believe the question,” Starr said of her daughter’s bold style. “These are questions he’s never been asked … before.”
Fleischmann is hoping a major network picks up her show.
Laurie Mawlam, executive director of Autism Canada called Fleischmann an inspiration.
“Ultimately, we should all follow our dreams and that is what she is doing,” Mawlam told CTV News. “Autism is not an obstacle for her.”
With a report by CTV News medical specialist Avis Favaro and producer Elizabeth St. Philip
Posted by Alisa Brownlee, ATP at 5:25 AM 3 comments:

Wheelie uses facial commands to move. View gallery (4 images)
Brazilian researchers have developed a wheelchair that can be controlled through small facial, head or iris movements. The team at Faculdade de Engenharia Elétrica e de Computação da Universidade Estadual de Campinas (FEEC/Unicamp) says the technology could help people with cerebral palsy, those who have suffered a stroke or live with amyotrophic lateral sclerosis and other conditions that prevent precise hand movements.
The team started to look into brain-computer interface (BCI) techniques (the acquisition and processing of signals that allow communication between the brain and an external device) in 2011. The group then decided to test those techniques in a real life situation.
The researchers built their prototype from a standard motored chair, removed the joystick and equipped it with sensors that can gauge the distance between walls and other objects, and pick up variations on floor surface.

A notebook that sends commands directly to the chair using a 3D camera running on Intel's RealSense technology was installed, which caters for interaction with a computer through facial and body expressions. RealSense is a stand-alone camera that uses depth-sensing technology and can be attached to any computer. The set includes a standard camera, an infrared laser projector, an infrared camera and a microphone array.
"The camera can identify more than 70 facial points around the mouth, nose and eyes. By moving these points, it is possible to get simple commands, such as forward, backward, left or right and, most importantly, stop," says the researcher Eleri Cardozo. Voice interaction is also possible, but the researchers say it less reliable because of differences in voice timbre and ambient noise.
The chair was also equipped with a Wi-Fi antenna that allows a caregiver to steer the equipment remotely through the internet, which could be handy should a wheelchair user get tired.
For patients with more serious conditions where facial movement is not possible, the team is also looking into a BCI technology that can pick signals directly from the brain through external electrodes and turn them into commands, though this type of equipment has not been added on the robotic chair yet.
The research team recently received extra funding to move forward with the project so it can be adapted and marketed in Brazil within the next two years. "Our objective is that the final product costs, at most, twice as much as joystick-controlled models, which sell for around R$7,000 (US$1,994)." To do that, a start-up called Hoo-Box has been created, which will focus on developing the Wheelie system further.
The researchers presented their project at the Third Brainn Congress in the city of Campinas, Brazil, in April.
Source: Fapesp
Posted by Alisa Brownlee, ATP at 5:14 AM 1 comment: