http://www.therapyapp411.com/2011/12/zite-personalized-magazine.html
This post also appears on SpeechTechie as part of Blog Awareness Month!

All month I have been singing the praises of blogs as a route to professional development and therapy planning, and I am ending with a bit of a twist- Zite Personalized Magazine (Free, iPad only for now) an app that allows you to subscribe not to blogs but to topics. Select topics of interest and Zite will pull in posts from various news sources (including blogs) that correspond with your selections.  Here's my Zite home page: 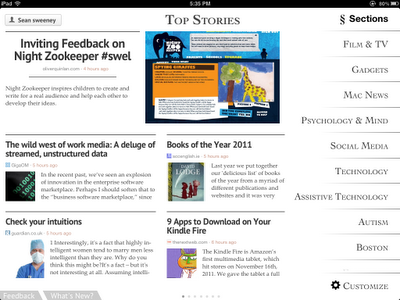 Zite works somewhat like music app Pandora in that you can then further customize your feeds by giving a thumbs-up or -down to articles that appear or request more from the author, source, or subtopic.  It is easy to share articles by email or send to Twitter, Facebook or other services, making Zite a great tool for participating in your Personal Learning and Sharing Network. 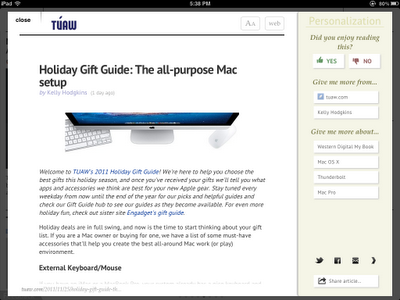 Zite is somewhat more of a leisurely experience than using Google Reader as you don't have a number of unread posts to contend with; just read what you want! Because Zite allows you to set up multiple profiles within the app, it could also be a tool for helping older students do research or explore topics of interest and work on comprehension and language strategies.

The business and culture of our digital lives,
from the L.A. Times

2
IBM is predicting that in the next five years we'll no longer need passwords for email or even ATMs, we'll be able to control smartphones and laptops with our minds, and we may even live in a world without junk email.
Too good to be true? Today, yes. But researchers at tech companies such as IBM are working on bringing these ideas to fruition, which is why the 100-year-old tech giant is including these and other ideas in its sixth annual "5 in 5" report of five technologies "that have the potential to change the way people work, live and interact during the next five years."

Mind-reading gadgets: IBM and other companies are working on devices that you can control with your mind. For example, rather than having to tap on a touch screen or through a series of buttons to place a phone call, someday you may need only to imagine calling someone and a mind-reading phone will make the connection, IBM said.

"If you just need to think about calling someone, it happens," IBM said of its prediction. "Or you can control the cursor on a computer screen just by thinking about where you want to move it."

Mind-reading technology, known as bioinformatics, has already shown up in simple forms from toy makers such as Mattel, and engineers at IBM and other companies "have designed headsets with advanced sensors to read electrical brain activity that can recognize facial expressions, excitement and concentration levels, and thoughts of a person without them physically taking any actions," the report said.

"Within five years we will begin to see early applications of this technology in the gaming and entertainment industry," IBM said. "Furthermore, doctors could use the technology to test brain patterns, possibly even assist in rehabilitation from strokes and to help in understanding brain disorders, such as autism."

No more passwords: Passwords will be left behind as devices instead grant you access by recognizing who you are, IBM is predicting.

"Your biological makeup is the key to your individual identity, and soon it will become the key to safeguarding it," IBM said. "Imagine you will be able to walk up to an ATM machine to securely withdraw money by simply speaking your name or looking into a tiny sensor that can recognize the unique patterns in the retina of your eye. Or by doing the same, you can check your account balance on your mobile phone or tablet."

A bit freaky right? An example of this sort of technology hitting the mainstream can already be seen in the facial recognition technology used in the "face unlock" feature found in the latest version of Google's Android operating system, known as Ice Cream Sandwich.

"Biometric data -- facial definitions, retinal scans and voice files -- will be composited through software to build your DNA-unique, online password," IBM said. "Referred to as multifactor biometrics, smarter systems will be able to use this information in real time to make sure whenever someone is attempting to access your information, it matches your unique biometric profile and the attempt is authorized."


Of course, this idea has and continues to raise privacy concerns as companies collect the biometric data needed to pull this sort of thing off.
"To be trusted, such systems should enable you to opt in or out of whatever information you choose to provide," IBM suggested.
People-powered homes: IBM projects that we will soon have the technology to generate the power needed for our homes ourselves.

"Anything that moves or produces heat has the potential to create energy that can be captured," IBM said. "Walking. Jogging. Bicycling. The heat from your computer. Even the water flowing through your pipes."
The ability to collect kinetic energy that is currently untapped is improving, the company said, pointing to its own team of scientists in Ireland who are "looking at ways to understand and minimize the environmental impact of converting ocean wave energy into electricity."

Mobile devices could fill the technology gap: Currently, the disparity between those with access to modern technologies is a wide one, particularly in emerging countries, though it is believed to be shrinking.
IBM is forecasting that over the next five years the gap will continue to lessen.

"In our global society, growth and wealth of economies are increasingly decided by the level of access to information," IBM said. "And in five years the gap between information haves and have-nots will narrow considerably due to advances in mobile technology."

The current, fast-growing adoption in India, an increasingly wealthy and powerful country, is an example of this already taking place, the company said, projecting that as many as 5.6 billion mobile devices could be sold worldwide over the next five years.

"As it becomes cheaper to own a mobile phone, people without a lot of spending power will be able to do much more than they can today," IBM said. ""In India, using speech technology and mobile devices, IBM enabled rural villagers who were illiterate to pass along information through recorded messages on their phones. With access to information that was not there before, villagers could check weather reports to help them decide when to fertilize crops, know when doctors were coming into town, and find the best prices for their crops or merchandise."

Junk mail extinction: Junk mail as we know it today will cease to exist in five years, IBM said.
But, if this prediction comes true, it won't be because companies are sending us less email. Instead, "unsolicited advertisements may feel so personalized and relevant it may seem spam is dead," IBM said. "At the same time, spam filters will be so precise you'll never be bothered by unwanted sales pitches again."
So how do IBM and its rivals envision a junk-mail-free future coming to pass? Real-time analytics will be used "to make sense and integrate data from across all the facets of your life such as your social networks and online preferences to present and recommend information that is only useful to you."
Posted by Alisa Brownlee, ATP at 4:09 PM No comments: