I should have known that my sister, Nell Tredway Hardy, would use those three words in the title of her monthly column she's writing for our hometown newspaper.

I should have known because that's the kind of attitude she's worn as a badge of honor all her life.
The youngest of five in our generation, she earned the nickname Captain Zoom-Zoom as a little girl for barreling straight down the steepest of ski slopes, our parents watching in sheer terror. As a pint-sized equestrian, she commanded horses to thunder around cross-country courses and dance around a dressage ring. As a young woman, she scaled rock cliffs and submerged herself in caves -- both without a glancing thought to danger.

Nell raised three sons. She ran an eight-stall barn and worked full-time. She weathered an ill-fated marriage and fought back against the demons of an alcohol addiction.

And now my sister, 55, musters all the courage, determination and hope that she can, waging the biggest battle of her life against an insidious disease known as amyotrophic lateral sclerosis (ALS), "a progressive neurodegenerative disease that affects nerve cells in the brain and the spinal cord." The doctor delivered the diagnosis over her cell phone one day in May of 2009. 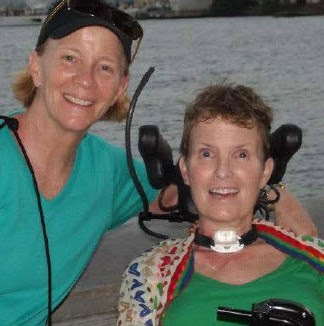 She's well aware of all the statistics. According to the ALS Association: "Approximately 5,600 people in the U.S. are diagnosed with ALS each year. The incidence of ALS is two per 100,000 people, and it is estimated that as many as 30,000 Americans may have the disease at any given time." The life expectancy of an ALS patient averages a measly two to five years from the time of diagnosis.

The barn -- it's sold now. The saddles, bridles, and blankets -- they belong to others. Her 13-acre horse farm -- she traded it in for a two-bedroom condominium.

Doctors performed a tracheostomy in January 2012. She takes her nourishment through a feeding tube. Her disease has rendered her limbs useless; her main mode of transportation now is a behemoth of a mechanical wheelchair. One blink of her eyes means yes. Ever-so-slight wags of her head mean no. She carries on conversations with her eye recognition machine, which allows her to peck out letters with her eyes. And she breathes every night with the help of a ventilator whirring by her bed.
And yet my sister tells us, and all those who read her column, not to worry. Nell's tentative plan of acceptance of ALS hasn't meant she's stopped living. In fact, she's more than alive. She's teaching us life lessons each and every day.

Supported by a cadre of RNs and LPNs, her family (including seven nieces and nephews), and more friends than she can count, Nell rarely stops. Since her diagnosis, she's been on four Caribbean cruises and flown cross-country to Los Angeles, where she realized dreams do come true when she met her hero, Ellen DeGeneres. At home, she relies on her Friends of Bill W. meetings to keep both her inner being and her life compass on track.

And every month Nell busies herself with her column chronicling her life with ALS. It takes her an average of 40 hours to compose about 600 words with her eyes on her DynaVox machine. She writes of her sons Brendan, Emmet and Connor; her dogs Shelby and Rico; her patience and introspective meditation; her firm belief that she will live long enough to see a cure for ALS.

So during May, ALS Awareness Month, let's pay special tribute to Nell, all the others living with this disease, and those who have gone before them. Think of them the next time you take a step. Embrace your child. Speak softly to your loved one.

A clinical editor in the health field for 15 years, Caroline B. Tredway has become a student on the subject of ALS since her sister's diagnosis. Nell Tredway Hardy is writing a book that will chronicle her life as a person with ALS (pALS).
For more by Caroline Tredway, click here.
Posted by Alisa Brownlee, ATP at 11:01 AM No comments:

The iPad: A caring touch for healthcare, surgeons, and non-verbal individuals

The iPad and its apps open a multitude of doorways to information and entertainment for millions of users. They've also moved into highly specialised areas in business, engineering, education and, perhaps most importantly, healthcare. They are giving voices to people who don't have the power of speech; tangible recognition to the blind; and improving the lives of thousands of disabled people.
They are revolutionising the way doctors and hospitals work, too. The devices are being clad in sterile, waterproof cases and taken into operating theatres to help surgeons in complex operations, and they're improving communication with patients about their ailments and treatments. They're being used between doctors, nurses and hospital medical and administrative systems.

Dr Henry Feldman, an assistant professor of medicine at Harvard Medical School in Boston, was recently in Australia demonstrating iPad systems for physicians, surgeons and hospitals. He believes he was the first doctor in the US, and probably the world, to harness an iPad. ''I got mine on day one - April 3, 2010,'' he says.

Part of his demo included dunking his iPad, clad in a clear plastic case called Frog Skin, into a bucket of water, showing it could be washed and sterilised as thoroughly as an endoscope for use in an operating theatre.

''The benefit is that instead of having to look up to a video screen to see medical images, the surgeon can have them on an iPad right beside the operating area - even take measurements on the screen with a swipe of his fingers,'' Feldman says.

In the US, doctors' use of iPads and their wealth of specialised iOS apps doubled between 2011 and 2012, according to a Manhattan Research study. Hospitals are rapidly installing network access and secure communications to support them.

''The iPad allows us to get [medication] orders in more quickly and safely, and access hospital records immediately,'' Feldman says.

''Patient care is more efficient and communication with patients better. It saves me time. We have ubiquitous, secure wi-fi at my hospital and I am not tied to a location. I can bring up images [MRI, X-ray and CT scans, and anatomical diagrams] at a patient's bedside, or when I talk with a surgeon I might meet in a hallway. I use my iPad 10 times more often than I use my stethoscope.''

In Victoria, at Yooralla, one of Australia's largest organisations supporting the disabled, iPads have been used since 2010 to help clients with physical and intellectual disabilities to live better, richer lives.

According to the Bureau of Statistics, there are more than 600,000 severely disabled Australians - about 3 per cent of the population - which has remained constant as our numbers grow. Yooralla receives 650 new clients every year.

Yooralla speech pathologists Martina Beggs and Helen McCulloch use technology to help people with complex communication problems and have used iPads since 2010.

Jane Farrall, a Melbourne consultant speech pathologist, was an early adopter of iOS devices. She experimented initially with the iPod Touch but found its small screen difficult for patients to handle.
''And then the iPad happened and everyone could see it changed the game,'' she says. ''It's now widely used in special schools all over Australia. It meets [many of] the needs of people with a wide range of other disabilities.

''Before iPad arrived, I would see people without speech and assess them for one of the custom-made augmentative and alternative communication [AAC] speech-generating systems that cost anything from $5000 to $30,000.''

Expensive customised equipment is still needed in some cases, ''but with an iPad it is now possible to get an AAC system for under $1000. The iPad has brought massive change,'' Farrall says.

Yooralla, a non-profit organisation, provides clients with up to $7000 for speech-generating devices and software, including apps, and works through ComTEC, an information and advice service, to support clients, their families and therapists in the adoption, selection and use of suitable technology and apps.

Vast numbers of apps are available from developer websites and Apple's App Store, but not all are suitable for seriously disabled people. Apps need to be carefully assessed against the needs of individuals, Beggs says, and, importantly, the family or carer support available.

Predictable, a text-to-speech app from British company Therapy Box, works with a Bluetooth switch for people with limited physical function, and has word prediction and an onscreen keyboard to make sentences that are spoken by a synthetic voice. It also provides access to Twitter, Facebook and SMS.
Because of high development costs, such apps are not cheap. Predictable is $169, and not the most expensive.

People with extremely limited control over their bodies often cannot use a keyboard or a touchscreen to scroll through text or control an app. One solution is technology called Eyegaze, which uses two or three cameras on a computer to accurately track eye movements over a virtual keyboard or onscreen symbols to command the computer or build text-to-speech sentences.

Eyegaze is coming to the iPad, probably as an app using accessory cameras, and several other, similar projects are also under way.
■ yooralla.com.au
■ comtec.com


The MYO armband lets you use the electrical activity in your muscles to wirelessly control your computer, phone, and other favorite digital technologies.


You can control presentations, video, content, games, browse the web, create music, edit videos, and so much more!


A Biometric Controller That Converts Muscle Twitches into Digital Actions


http://www.fastcodesign.com/1672423/a-biometric-controller-that-converts-muscle-twitches-into-digital-actions#1
Posted by Alisa Brownlee, ATP at 10:01 AM No comments: