With the Movement of an Eyebrow, Als Patient O’brien Has Won Awards

For some 10 years, using just his eyebrows, Leonard Florence Center For Living (LFCFL) resident Patrick O’Brien – who has ALS and cannot move anything but his eyebrows – worked away at creating what he hoped would be his greatest masterpiece on film.
A filmmaker before getting ALS, he was inclined to document the entire process of the disease’s progression, and did so quite well.
As the disease progressed, though, it became harder for him to work on the film. Several editors had helped him with the project, but nothing seemed to take the nearly-finished film from good to great.

Then, by coincidence, Documentarian Doug Pray entered the picture, and he and O’Brien formed a team that finally got the film out to the world.
And the world has loved it.
With O’Brien and Pray working together, ‘Transfatty Lives’ was born, and now the film is garnering awards from New York City to Milan. Earlier this year, O’Brien’s film won the Tribeca Film Festival in its category, and just this past Sunday it won the Audience Award at the Milano Film Festival in Italy.
“What a long, strange trip it’s been,” said O’Brien this week over e-mail. “The movie almost didn’t get finished. It was by luck that our composer, Bradford Reed, bumped into filmmaker Doug Pray one night at a party. Doug watched a rough cut of the movie and wrote a six-page letter to me about how to fix my movie, then titled ‘Everything will be okay.’”
His letter came just in time, O’Brien said.
“I had been trying to make the movie work for eight years at that point, and the film needed some fresh eyes,” said O’Brien. “I had been working with a writer and editor named Scott Crowningshield at that stage. It was good, the film, but not great. It had to be great. I had been documenting my life with ALS since the beginning, and it was going to be great. It just needed the right touch. Thank God for Doug Pray, who agreed to come on as a producer. It was good that Doug came onto the scene at that point in time, because by then I had experimented so much with my cokamayme ideas.”
Pray said in a telephone interview this week that he is incredibly honored to have worked with O’Brien.
“By the time I met Patrick, he had grown very frustrated and realized this had to be the last big push for his movie,” said Pray. “You can only keep reforming and editing movies for so long. I think we all felt that energy…The film did need help. It was beautiful, but needed help. It was like a wonderful painting that needs a frame. It was so powerful, funny, weird and artsy. No one was going to see if we didn’t make the push and take this on, and the potential for the film was enormous.”
Pray said O’Brien had gathered all of the footage – years of footage – and had compiled it for quite some time. The trick was to edit all of the raw footage into a great accounting of what O’Brien went through in his ALS journey – a journey that included lying motionless for several years in a Baltimore nursing home, only able to stare at the ceiling.
Once arriving at the LFCFL, the technology and enormous improvement in his quality of life at the facility’s ALS Green House, allowed him to continue his work and to be a key decision maker and director in the editing of his film.
Once again, O’Brien did that without the use of any of his body aside from the movement his eyebrows.
“As filmmakers, we are fussy with our own work, and I can’t imagine what it must have been like for Patrick to be locked in a bed in Boston, not able to move, while these other people all over the place are working on his film,” said Pray. “However, the degree to which he was able to give input and guide us and direct us about where he wanted the film to go is simply remarkable and amazing especially when you consider his situation. I’ll never forget this experience.”
Pray also said O’Brien’s story about winning Tribeca and Milan – and being able to travel to the Tribeca Festival for his premiere – is a feather in the cap for the LFCFL.
“It says a lot about the Leonard Florence that they allow people to be themselves and let people live lives that are meaningful – even when they’re paralyzed,” he said. “They supported this whole thing, even getting Patrick down to New York, which wasn’t easy. He couldn’t have done this without the technology available and support of that facility. He couldn’t have done this at a regular nursing home facility. That says a lot about Leonard Florence. It’s not normal; it’s special.”
The film is not yet available for public viewing due to the fact that it is still in the Film Festival circuit. It will be premiered in Los Angeles later this year, and will have a Boston premiere some time next year, O’Brien said. However, he said people can visit TransFattyLives.com for more information and to view a trailer.
The LFCL features neurological specialty residences with cutting-edge assistive technology, allowing individuals with ALS (amyotrophic lateral sclerosis, also known as Lou Gehrig’s disease) and MS (multiple sclerosis) to receive skilled nursing care in a nurturing home environment. The 7th annual ALS & MS Walk for Living, a fundraiser to support these individuals as well as the innovative residences, will be held on Sunday, September 27, a 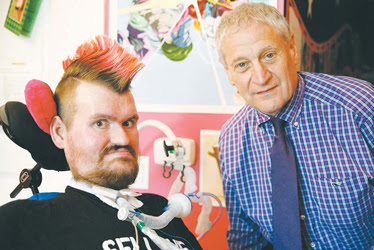 Filmmaker Patrick O’Brien – who has ALS and can only move one eyebrow – with Chelsea Jewish Foundation CEO Barry Berman last week at O’Brien’s home in the Leonard Florence Center for Living. This year’s ALS Walk for Living on Sunday will pay homage to several awards recently won by O’Brien for his film ‘TransFattyLives.’
t 165 Captains Row on Admirals Hill at 10 a.m.
This year Billy Costa of KISS 108 will act as emcee and kick-off the two-mile walk.  Media sponsors include the Independent Newspaper Group; major corporate sponsors include Biogen, M&T Bank, AHOA, Kayem and Clifton Larson. Immediately following the walk, there will be a BBQ hosted by Chili’s, doughnuts provided by Dunkin Donuts, face painting, live dance performances, a petting zoo, a photo booth and a raffle. There is a $10 donation fee to participate in the Walk, which includes a Walk for Living tee shirt, the BBQ and all the activities. The Walk for Living is one of the few walks that are dog-friendly.
Posted by Alisa Brownlee, ATP at 7:05 PM