An iPad Is Not an Augmentative and Alternative Communication (AAC) Device-Unless It Is!

Via http://www.speakforyourself.org/2013/11/03/ipad-augmentative-alternative-communication-aac-device-unless/
Speak for Yourself AAC Language App, Changing the world, one voice at a time
When we write or say something about the iPad and AAC, we inevitably have someone respond that, “The iPad is not for everyone.” (Obviously. Nothing is for EVERYONE.)  “An iPad is NOT a communication device,” is another popular statement.  We’ve seen and heard this (or some derivative of it) quite a few times recently.  We disagree, so we thought it would save time if we posted our reasons here.

It was more common to hear this type of resistance when the iDevices were first introduced to the market. As a matter of fact, years ago, when the iPod was first released, we deterred people from using it as a communication device. There were, and to some extent still are, a variety of reasons we didn’t think it was sufficient for someone to rely on for his/her communication needs. To date, we still have not met anyone who is using it effectively to say anything and everything they want to say. If you know someone or if you ARE someone, who uses the iPod for spontaneous, generative AAC, we would love to hear from you!

Nonetheless, my gift request for Christmas that year… An iPod with a communication app.

Our school didn’t purchase it because they didn’t feel it was appropriate for communication.  However, I wanted it so that I could talk intelligently about it because we were being asked about it almost daily.  I didn’t feel comfortable saying, “It’s not appropriate for communication” and cutting off the conversation. People were stopping us in the hallways of schools, excited to talk about AAC. I wanted to engage in those conversations.  We also didn’t want to miss an opportunity to recommend a lower-cost, consumer device that may be appropriate for someone.  So I got it for Christmas, and by the end of the break, I had tried sample sentences, made modifications to vocabulary, and challenged myself to make it effective and “easy” for students.  At that time, my best efforts to make the iPod into an efficient, clinically sound communication device were unsuccessful.
Here are a few of the reasons:

2. Lack of available language systems
There were not enough app options to trial with students. The only option was a page-based system that did not keep motor planning consistent and had limited core vocabulary.

3. No amplification
The speakers of the iPod could be heard in a small, quiet setting, if you were in close proximity to the speaker. That scenario was not realistic in life and not a viable option for students who need to have a loud, strong voice. External speakers were available on the market, but it wasn’t the most feasible solution to get an iPod for portability and then have a child in a situation where he has to carry a separate speaker with him to be heard. The iPod cases with speakers did not have enough amplification.

We asked the major device companies if they were going to make an app because if the language system was stronger, maybe we could problem solve for the students who were not able to get the expensive devices. The device companies said “No”. We turned away from the iPod and used it as a reinforcer for students as we worked to build language on their communication devices. We looked over our shoulder and continued to monitor the release of apps, hoping that one would follow clinically-sound AAC principles.

When news of the iPad hit the market, we whirled around, eyebrows raised.  We saw possibility in the hardware for our ambulatory students for several reasons,.  Here are the reasons we like the iPad or iPad mini as a communication device for students who are physically able to access it:

The 10-inch capacitated screen  (or almost 8-inch screen on the mini)
The screen is larger than most traditional device screens for ambulatory students. The capacitated screen means that students who had difficulty with press and release can access the iPad screen with a light touch.

The technology is familiar and accessible to the general public
Parents and therapists don’t have to learn an entirely unfamiliar device. Many of them have experience with iPhones and iPods, so we don’t have to explain that they have to hit the home button to exit the app, how to turn it on and off, or how to charge it. They know how to tap the screen with the right amount of pressure and easily use the iPad gestures to swipe back to the settings when necessary.  Even our youngest preschool students are navigating the gestures on the iPod and their parent’s iPhone.

Since the technology is accessible to the general public, students are not without their voices for long if something goes wrong with their iPad.
Protection plans can be purchased for roughly $80, and when the home button on my iPad stopped working, I walked into an Apple Store (a little panicked) and walked out with a new iPad that was synced with iTunes and identical to the broken one.

The response from some of you may be that “Device companies provide support.”

Service used to be a benefit of purchasing a traditional device, but much of the phone support that is needed is for funding and hardware issues.  That type of support is not necessary for the iPad, and functional support for apps is available online.

The iPad weighs less than traditional devices
At the time that it was released, the iPad was two to six pounds lighter in weight than the devices that students were carrying throughout their day. If you think that’s not a huge difference, think of a thirty pound three-year-old who is carrying 10% of his body weight everywhere he goes. If you weigh 120 pounds, that would mean carrying an additional 12 pounds everywhere you go. That doesn’t even factor in low muscle tone, balance difficulties, or sensory issues intensified by a strap around a student’s shoulder/neck and across her body.  A few pounds make a big difference.

The iPad is affordable
We had students whose insurance had denied a traditional communication device, several times.  The districts refused to purchase the devices because they were “not in the budget.”  We had children sitting in classrooms who did everything right. They learned to use a device during a successful trial. They took ownership of the device and carried it throughout their school day. Their behaviors decreased.  Vocabulary and language expanded, but when the trial ended, they had…nothing. They are the students who haunted us. We watched the bright, interactive light in their eyes dim as time passed. The districts said, “We can give them an iPad. Make it work.”  Districts were willing to give an iPad to a nonverbal child, if the parent was willing to purchase the app (or vice versa). The districts were also willing to pay for support to reprogram and implement the iPad as a communication device.  In some cases, parents were willing to purchase the iPad, app, and case, if the district would support it in school.
AAC was changing…as we sat in meetings and explained language development. It was changing…as we sat quietly in corners of classrooms, reprogramming apps to decrease page navigation, keep motor planning consistent (as best we could), and give students access to core and fringe vocabulary.  We waited less and less patiently for someone to release an app with a language system that would allow students to communicate quickly and effectively, and start as basic as we needed but grow to a large vocabulary. We waited until finally we said, “What are we waiting for?” and started to create Speak for Yourself.

There are a variety of AAC language options available for the iPad
Of course we think that Speak for Yourself is the most efficient, clinically-sound AAC app available to encourage language development and help to promote spontaneous, generative communication. However, there are over 300 AAC apps on the market. So, if you disagree, you can find whatever you think is “better” in the form of an app. If you have a child who is successfully using a device, all of the major device companies have apps. If you have children using mid tech plastic devices, there are apps from those companies.
In response to those who say, “The iPad is an entertainment device and was not intended to be a communication device.”
Or
“The iPad is not for everyone.”
Or
“The child already sees it as entertainment, and cannot use it for communication.”

Apple makes improvements to support a variety of accessibility accommodations.

Maybe Apple wasn’t thinking of people with disabilities when it created the iPad, but if you look under “accessibility” in the iPad settings, the options have increased with each new version of iOS. Voice over was one of the first accommodations, and it allows people with visual impairment to know what they are touching on the screen by reading it to them. Guided Access, which allows the iPad to be “locked” into an app by disabling the home button was added in iOS 6. Switch access, including the ability to use the iPad itself as a switch (by touching anywhere on the screen to make a selection during scanning) or head movements was added in iOS 7.  Could eye gaze access be in the future? (We sure hope so!). It’s not for everyone, but the iPad hardware can meet a lot of individual’s needs, and Apple seems to expand that reach with each release.

As far as the iPad being created as an entertainment device, where is the benefit of keeping it in that box?  We use inventions all of the time in new and creative ways. I don’t make my daughter ride her bike down curbs because the sidewalk cut outs were “intended” for wheelchairs (Thanks to Robin Parker of the PrAACtical AAC blog for this analogy).

Eye gaze technology was originally used in the military and marketing. It would be ludicrous for us to say, “It wasn’t intended to help people who can’t talk or move effectively, so we shouldn’t use it for that.”  How many beautiful voices would be lost if we weren’t open to new ideas and possibilities? How many will never be heard if we refuse to consider viable options?

Many of our miracles today are in our technology. Robotics are allowing people to move prosthetic limbs.  Brain scanning computers are attempting to allow communication by thought to help people who are “locked-in.”  So when someone says that an iPad is not a communication device, that is just not true.  When it is, it allows parents to know their child better.  It gives students and adults who are nonverbal or limited verbally the ability to have a voice, rather than hoping that someone correctly guesses their needs, wants, feelings, and pain.  Sometimes it allows a child to express her thoughts or play peek a boo, and in those times, an iPad is most definitely a communication device. 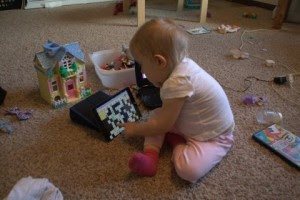