How technology is helping people with speech impairments to talk

New technology is allowing people such as Alan Martin, who has cerebral palsy, the chance to communicate properly for the first time
Sunday 16 September 2012 16.00 EDT via The Guardian Newspaper
http://www.guardian.co.uk/lifeandstyle/2012/sep/16/technology-helps-people-speech-impairments 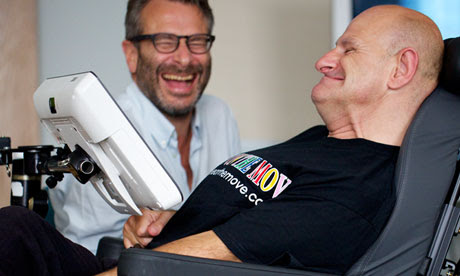 The world at his fingertips: Alan Martin shares a joke with Jon Henley. Photograph: Christopher Thomond for the Guardian
I am sitting staring at a computer screen. So far so banal, except that this screen features a red dot that, by some technological magic, tracks the movement of my eyes: I can place it where I want on the screen just by looking. The bottom of the screen portrays a keyboard, although I could, if I chose, select other screens made up of various vocabulary, grammar and expression-based menus, which, for experienced users, would doubtless speed things up.

Because this is painstaking. I look at a letter, and the red dot sits on it. I continue staring, and the dot blinks, twice. The letter then pops up at the top of the screen. I move on to the next letter (or, more often, the backspace).

It gets easier: there's predictive text, like on a mobile phone, so I stare at the word I want, which gets added to my sentence. Eventually, the phrase is complete. I stare at it and it blinks. "What an amazing machine," says a cool, synthesised voice. "Rather let down by its user."

This is eye-gaze technology, at the leading edge of a fast-evolving and – for those who need it – vital field known as augmentative and alternative communication (AAC), plus the closely related assistive technology (AT). Without it, we would have been denied access to the remarkable mind of Professor Stephen Hawking (not to mention his starring role at the Paralympics opening ceremony). Nor would the locked-in syndrome sufferer Tony Nicklinson have been able to express so memorably – using eye-gaze – his despair at being refused the right to an assisted suicide. Hawking, with characteristic elegance, summarises its value: "Even more important than the freedom of speech is the freedom to speak."

Most of us know nothing about it. Worse, says Anna Reeves of the ACE Centre, a national charity that provides independent AAC assessments, advice and training, "a lot of people who need it have real trouble getting it. The funding's a mess. It falls between education and health, and most local authorities don't have specific budgets for it."

Yet AAC can be life-changing. Alan Martin, who developed cerebral palsy as an infant, was 31 before friends clubbed together to buy his first communication aid. "Before that," he explains in one of several pre-recorded messages he can activate on his current machine, "I relied on facial expressions and gestures. It was very frustrating."

Jovial and instantly engaging, Martin now runs his own company, Mouse on the Move, providing inclusive dance workshops for people with disabilities. To talk, and teach, he uses a wheelchair-mounted portable computer. He has reasonable control of his right arm, so uses a finger to press symbols on the screen that open up successive folders of images, words and frequently used phrases. He can also send emails and – an exciting new addition – text messages through a mobile phone connected to his computer. The whole system, Reeves says, cost around £8,000, and is in the middle of a spectrum of more than 100 different kinds of communication aids. ("Rubbish," says Martin succinctly, when asked what he thought of his first device.)

At one end are simple picture books and communication boards from which users select letters, words, phrases, pictures or symbols to communicate their message. Simple electronic devices contain digitised speech messages pre-recorded by a family member or carer and activated by a big button. More sophisticated boards hold up to 32 symbols and attached messages.

But helpful as these devices are, they are limited to pre-set messages. Computer-generated speech lets users say what they want to say. A portable machine called the Lightwriter has existed since the 1970s, allowing people who can type to display messages on a screen and also speak synthetically. More recently, says Reeves, "we've seen some great apps being developed for iPads and the like. If they work for you, they're brilliant. Especially for kids, because they're cool."

One, Proloquo2Go, even features a couple of authentic British children's voices, as well as "sad" and "happy" versions of the same voice; until recently synthesised speech robbed users of accent, emotion and intonation. Alan, who was born on Merseyside and is a huge Liverpool fan, would love to be able to speak scouse.

At the top end are the systems used by Martin, Nicklinson and Hawking: fully functioning computers, controlled in any number of ingenious ways. Hawking now uses a muscle in his cheek; another system moves the mouse through minuscule lip movement. These systems are capable of emailing, texting and even opening doors, turning on lights and operating the telly.

There are, Reeves says, perhaps 260,000 people in Britain using AAC equipment, about 10% of them using this kind of hi-tech aid. Their conditions range from serious physical and learning disabilities through sensory impairment to autism, motor neurone disease, stroke and, commonly, cerebral palsy. "There are also many who are undiagnosed, who simply present to us with an inability to communicate," she says. "It's far more common than people think."

Formed this summer by the merger of two separate charities to develop what would be, astonishingly, Britain's first national AAC/AT service, the ACE Centre holds open information days, carries out in-depth needs assessments on individuals, and advises and trains children and adults with AAC needs as well as teachers and carers.

But it doesn't have the money to provide actual aids for any longer than a short test period. Reeves wants to see a proper, secure, nationwide provision model that would ensure everyone in the country who needs communication aids gets them, preferably on long-term loan. "At the moment," she says, "we feel a bit like ladies in a sweet shop. We say: 'Look, this is all the lovely stuff available. Now fund it.' Which is wrong: communication is not a privilege, it's a fundamental right."

For futher information visit: ace-centre.org.uk, communicationmatters.org.uk
Posted by Alisa Brownlee, ATP at 9:40 AM