A Little Device That’s Trying to Read Your Thoughts 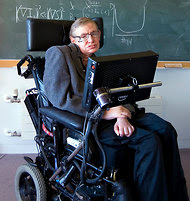 COMMUNICATION Stephen Hawking’s glasses pick up twitches in his cheek.

Called the iBrain, this simple-looking contraption is part of an experiment that aims to allow Dr. Hawking — long paralyzed by amyotrophic lateral sclerosis, or Lou Gehrig’s disease — to communicate by merely thinking.